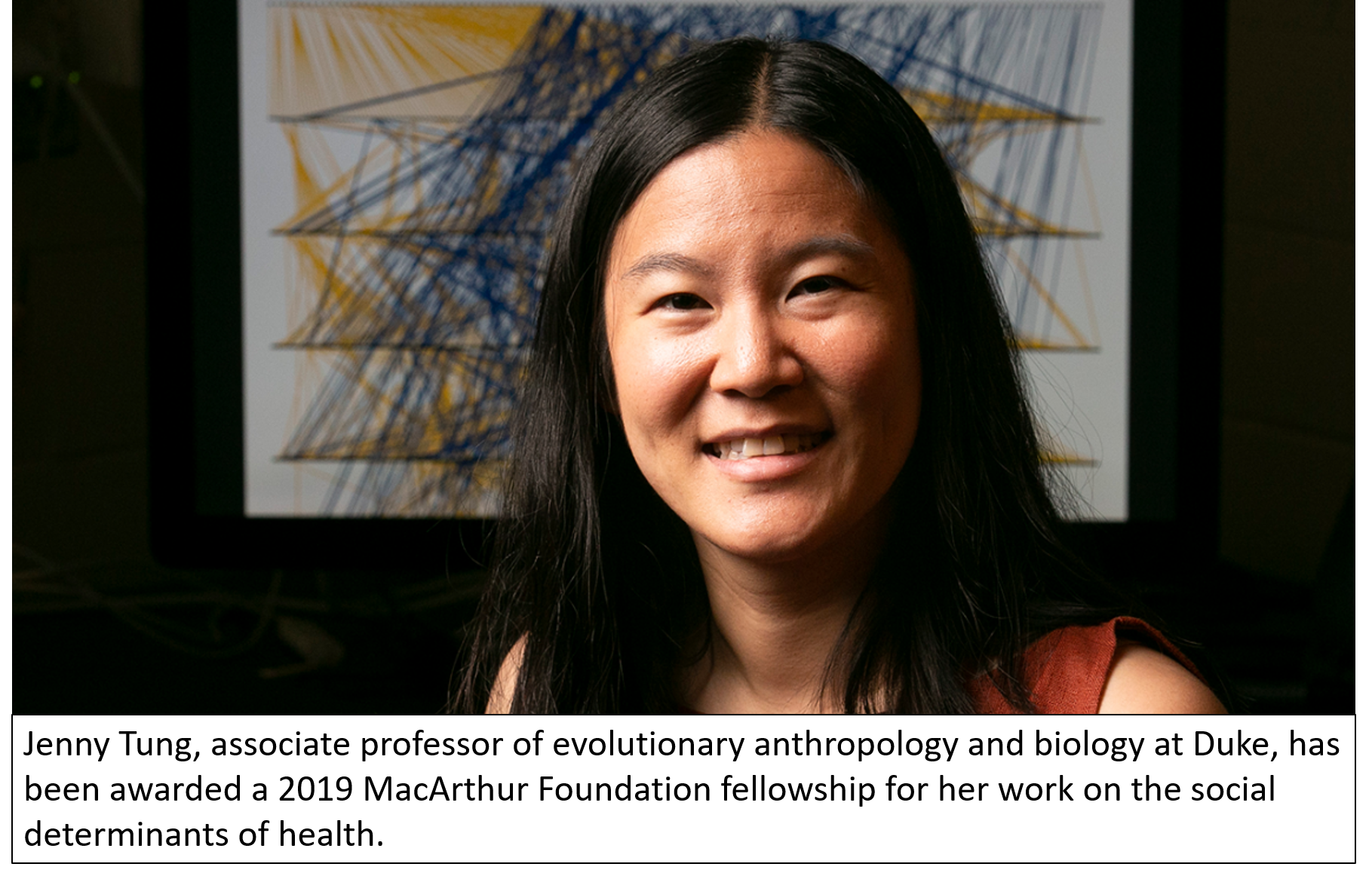 If you asked Jenny Tung’s parents, “no one’s kids that they knew of went off to Africa every summer to look at monkeys.” But Tung has been doing just that since her first trip to Kenya in 2006 to study the wild baboons of Amboseli.

She joined a research project that year that had been watching the same troops of free-ranging baboons within sight of Mt. Kilimanjaro since 1971, witnessing pairings, births, fights, deaths. Many generations of baboons later, the Amboseli Baboon Research Project is still going on, and Tung, first as a Duke graduate student and now as an associate professor, has built on its treasure of data.

Her major contribution has been adding sophisticated DNA analysis to the decades of Amboseli observations and seeing new patterns over the span of time. Tung is now expanding her examination of links between social status and health to rhesus macaques, meerkats and mole rats.  In the macaques, Tung’s team has shown that the stress of life at the bottom of the social ladder can alter the immune system, just as it does in baboons. The results provide evidence that low social status leads to disparities in health, not just the other way around, as some researchers have argued.

On Wednesday, Tung, 37, was awarded a 2019 MacArthur Foundation Fellowship -- also known as the “genius grant” -- for her work. The five-year, $625,000  fellowship is awarded to 20 to 30 individuals each year “to encourage people of outstanding talent to pursue their own creative, intellectual, and professional inclinations.” Past recipients have included writers, scientists, artists, social scientists, humanists, teachers, entrepreneurs, and others.

Tung is a scientist with a broad view. She wants to understand how social and environmental adversity affects health and survival over the lifespan of an individual.

Numerous studies show that human childhood trauma can have far-reaching effects on adult health; Tung’s research finds that the same is true for baboons. In 2016, Tung and colleagues showed that baboons that experience multiple misfortunes in early life live shorter adult lives.

In humans, such patterns might be attributed to differences in diet, exercise or medical care. But Tung’s results show that early adversity, such as being born in a drought or being orphaned young, can have long-term negative effects on survival in communities of social animals in which those differences don’t exist.

Tung is the third acting Duke professor, all women scientists, to win the MacArthur prize while at Duke, and the first in 30 years. She follows in the footsteps of biochemist Jane Richardson (awarded in 1985) and primatologist Patricia Wright (1989).

Tung, who was just told of the unexpected recognition earlier this month, hasn’t decided what she’ll do with the money.

“I don’t know yet. I feel an obligation to try to live up to how MacArthur sees these fellowships: as an impetus to creativity. So I’m trying to figure out what I can do to fulfill that mission,” Tung said. “I’m very humbled and very grateful that there are people in my community who value the work my collaborators, lab and I have been doing.”

Duke President Vincent Price congratulated Tung on the singular honor. “Dr. Tung is most deserving of this great honor, with her many contributions to evolutionary anthropology over the past decade and the many more she is sure to make in the years to come,” Price said. “We are so very proud she is conducting this work at Duke.”

Jenny Tung received her B.S. and Ph.D. from Duke in 2003 and 2010, advised by biology professors Susan Alberts and Gregory Wray. After a postdoc at the University of Chicago with human geneticist Yoav Gilad, she rejoined Duke as an assistant professor in 2012.

In 2016, she was awarded a prestigious Sloan Fellowship, and last year she was named one of “Ten Scientists to Watch,” by Science News.