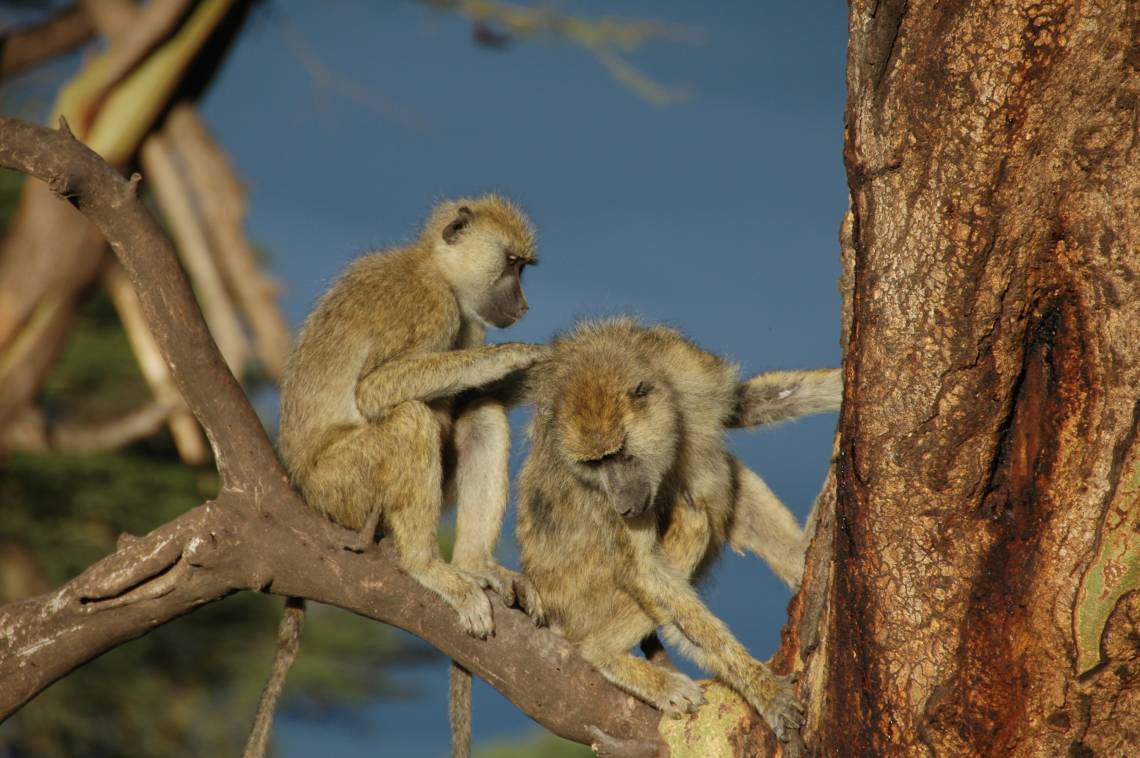 Close bonds with the opposite sex can have non-romantic benefits. And not just for people, but for our primate cousins, too.

Drawing on 35 years of data, a new study of more than 540 baboons in Amboseli National Park in Kenya finds that male baboons that have close female friends have higher rates of survival than those who don’t.

Researchers have often assumed that when a male is friendlier to certain females, it’s for the reproductive perks: to better protect his offspring, or to boost his chances of mating with her. But the new study points to an additional potential benefit: female friends may help him live a longer life.

The team’s findings were published Sept. 21 in a special issue of the journal Philosophical Transactions of the Royal Society B.

It’s well known that people who have close friendships are more likely to live a long life than those who don’t. In fact, human studies show that making and keeping friends can be as important for longevity as losing weight and getting exercise.

In the last decade, similar patterns have been found in animals ranging from monkeys and horses to dolphins and killer whales. However most of this research has focused on females, whereas males are more of a mystery. The reason is that, in most social mammals, females typically spend their entire lives in the same group, while males come and go, leaving researchers with only a partial snapshot of their lives.

“It means there are lots of gaps in our understanding of male social life,” said senior author Susan Alberts, chair of the evolutionary anthropology department at Duke University and DUPRI Scholar. Using statistical techniques to infer mortality risk at each age from sparse data, Alberts and colleagues looked at whether the link between survival and friendship was the same for male and female baboons.

Since 1971, researchers have followed individual baboons in southern Kenya on a near-daily basis, noting who they socialized with and how they fared over their lifetimes as part of the Amboseli Baboon Research Project.

Baboon besties don’t catch up for coffee or bare their souls over beers. But they do spend time together grooming -- a give-and-take that involves sitting close together and stroking and picking through each other’s fur, looking for ticks and other parasites. “It’s a baboon’s way of bonding and relieving stress, as well as providing some help with hygiene,” Alberts said.

Males spend very little time grooming each other, but they do groom with females, and not just when the females are fertile.

Analyzing data for 277 males and 265 females, the team estimated the ‘strength’ of the bonds in each baboon’s inner circle by measuring how often they spent time grooming with their closest friends.

The researchers showed for the first time in a wild primate that, not surprisingly, both sexes benefit from having strong social ties. Just like humans, “baboon males live longer lives if they’re socially connected,” Alberts said.

Males that maintained strong female friendships were 28% more likely to make it to their next birthday than their socially isolated counterparts.

Indeed, the team found that the flip side of the friendship coin, social isolation, can be a bigger threat to male survival than the stress and dangers of fighting their way up the pecking order.

Alberts says more work needs to be done to confirm that the link in baboons is in fact a causal one, and if so, to figure out exactly how the bonds of friendship affect physiology to lengthen their lifespans.

But the researchers say their work on baboon social behavior suggests that the power of friendship may have deep evolutionary roots in the primate family tree.

“How do primate friendships get ‘under the skin’ to lengthen life?” Alberts said. “We still don't know; it's one of the most wonderful black boxes in my life.”