Research Agendas Converge to Demonstrate Strong Parallels Between the Consequences of Social Adversity in Human Populations and Other Social Mammals: Science Review, “Social Determinants of Health and Survival in Human and Other Animals” 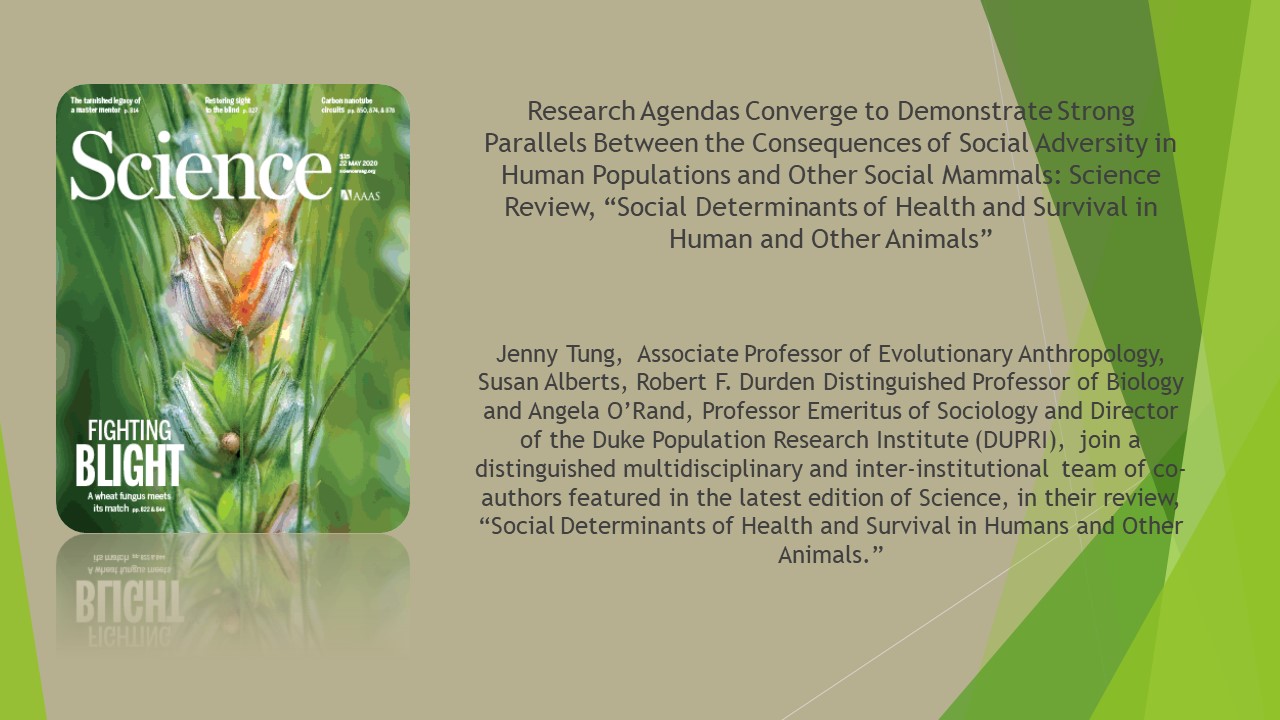 Jenny Tung,  Associate Professor of Evolutionary Anthropology, Susan Alberts, Robert F. Durden Distinguished Professor of Biology and Angela O’Rand, Professor Emeritus of Sociology and Director of the Duke Population Research Institute (DUPRI),  join a distinguished multidisciplinary and inter-institutional  team of co-authors featured in the latest edition of Science, in their review, “Social Determinants of Health and Survival in Humans and Other Animals.”

Tung and her colleagues point out that the strength of the relationships between social factors, disease risk, and survival has drawn attention from researchers in both the social and natural sciences. Social scientists such as O’Rand are motivated by identifying the social bases of differential health with an interest to improve human health. Meanwhile, evolutionary biologists like Tung and Alberts are interested in the origins of sociality and the determinants of Darwinian fitness.

The authors explain that these research agendas have now converged to demonstrate strong parallels between the consequences of social adversity in human populations and in other social mammals, at least for the social processes that are most comparable between species. Findings from these studies suggest that some aspects of the social determinants of health—especially those that can be investigated through studies of direct social interaction—have deep evolutionary roots. They also present new opportunities for studying the emergence of social disparities in health and mortality risk.

While the relationship between the social environment and mortality risk has been known in humans for some time, studies in other social mammals have only recently been able to test for the same general observation. Based on the strong evidence that some of these determinants are shared, the review argues that comparative studies should play a frontline role in future efforts to understand them.

Under Tung’s leadership, this  review  was made possible through the Social and Biological Determinants of Health Working Group supported by the Duke Center for Population Health and Aging (P30 AG034424), a Center in the Demography and Economics of Aging Program funded by the Division of Behavioral and Social Research at the National Institute on Aging (NIA).

Social Determinants of Health and Survival in Humans and Other Animals