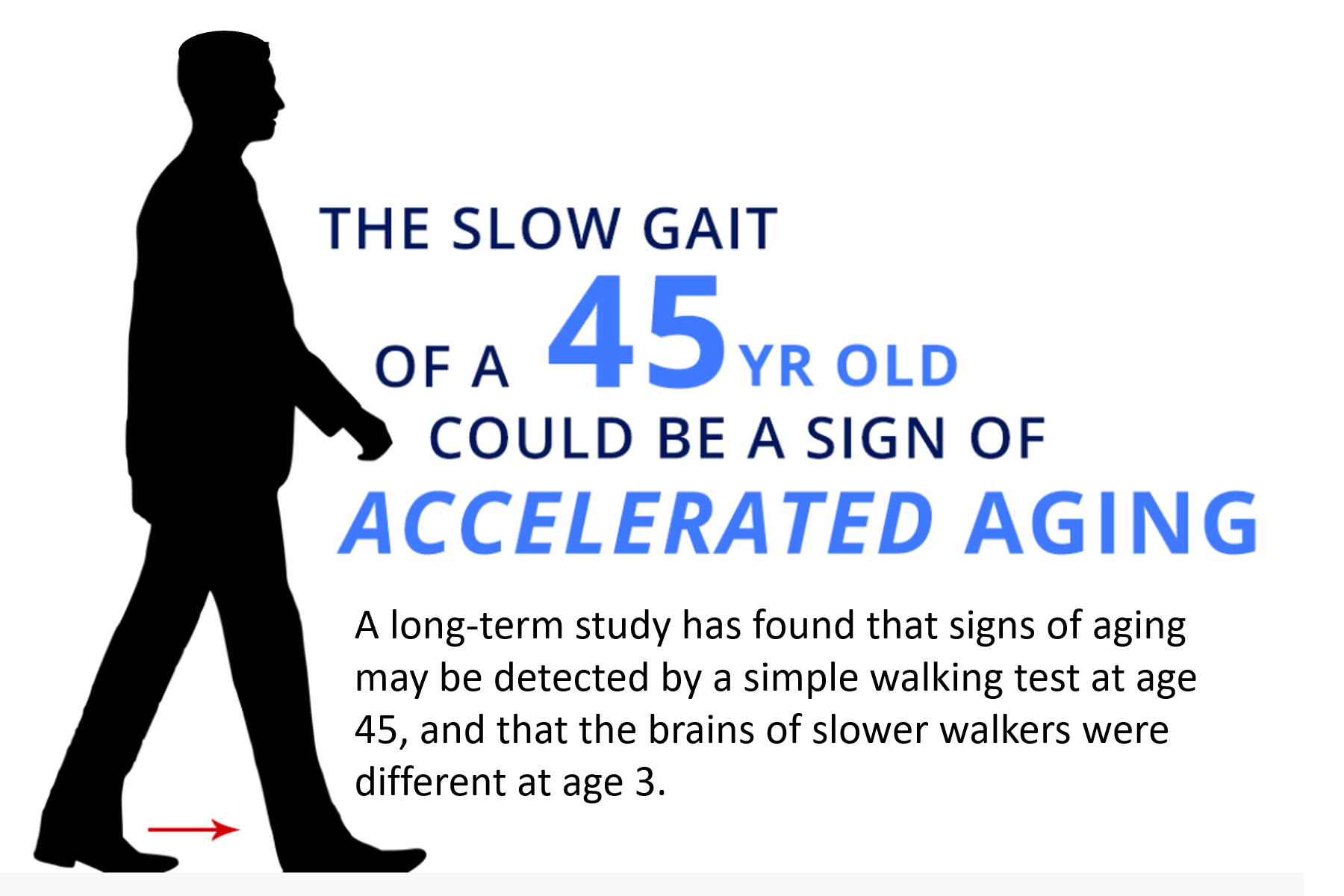 DURHAM, N.C. -- The walking speed of 45-year-olds, particularly their fastest walking speed without running, can be used as a marker of their aging brains and bodies.

Slower walkers were shown to have “accelerated aging” on a 19-measure scale devised by researchers, and their lungs, teeth and immune systems tended to be in worse shape than the people who walked faster.

“The thing that’s really striking is that this is in 45-year-old people, not the geriatric patients who are usually assessed with such measures,” said lead researcher Line J.H. Rasmussen, a post-doctoral researcher in the Duke University department of psychology & neuroscience.

Equally striking, neurocognitive testing that these individuals took as children could predict who would become the slower walkers. At age 3, their scores on IQ, understanding language, frustration tolerance, motor skills and emotional control predicted their walking speed at age 45.

“Doctors know that slow walkers in their seventies and eighties tend to die sooner than fast walkers their same age,” said senior author Terrie E. Moffitt, the Nannerl O. Keohane University Professor of Psychology at Duke University, and Professor of Social Development at King’s College London. “But this study covered the period from the preschool years to midlife, and found that a slow walk is a problem sign decades before old age.”

The data come from a long-term study of nearly 1,000 people who were born during a single year in Dunedin, New Zealand. The 904 research participants in the current study have been tested, quizzed and measured their entire lives, mostly recently from April 2017 to April 2019 at age 45.

Adding insult to injury perhaps, the slower walkers also looked older to a panel of eight screeners who assessed each participant’s ‘facial age’ from a photograph.

Gait speed has long been used as a measure of health and aging in geriatric patients, but what’s new in this study is the relative youth of these study subjects and the ability to see how walking speed matches up with health measures the study has collected during their lives.

“It’s a shame we don’t have gait speed and brain imaging for them as children,” Rasmussen said. (The MRI was invented when they were five, but was not given to children for many years after.)

Some of the differences in health and cognition may be tied to lifestyle choices these individuals have made. But the study also suggests that there are already signs in early life of who would become the slowest walkers, Rasmussen said. “We may have a chance here to see who’s going to do better health-wise in later life.”